The Downtown Riverfront Master Plan was unanimously approved by the Board of Aldermen at their October, 2017 meeting. This plan, developed over a few short months, is the result of thousands of responses from you and our community.  We wish to sincerely thank you for all of your ideas and the many conversations which have resulted in a plan that envisions a new future for our downtown riverfront. This plan will guide the development of our downtown riverfront for many years to come.

For full background information on the plan, public outreach and to view the project website, please visit
courb.co/Nashua!

The next step is to begin moving forward with implementation, likely over several phases. We will be engaging with you, our stakeholders, and partners to move this forward. Thank you!

In the spring of 2019, the City began taking steps to bring about the implementation of the Downtown Riverfront Master Plan. The City issued an RFQ and ultimately hired VHB to lead the project’s design & engineering efforts. The project team continued engaging the public and various stakeholders, which resulted in the following draft concept plan as presented to a Joint PEDC & Infrastructure Meeting on July 8, 2020.
Draft Concept Plan 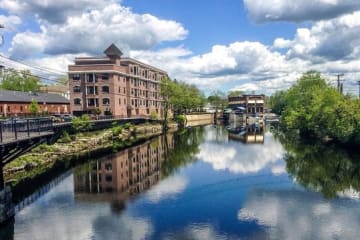