After COVID-19 concerns shut down fixed route service on March 25, 2020, NTS sprang into action by designing a phased approach to safely return to service. NTS began with on-demand service for essential trips only and then slowly reintroduced fixed route service to major corridors in Nashua during Phases 1 & 2.

The current pilot program was designed in conjunction with Phase 3 of Nashua Transit’s return to service plan. When developing this pilot service model, NTS considered the essential needs of passengers during Phases 1 & 2 and also examined pre-pandemic requests for improved service. The goal for Phase 3 was to service the current needs of passengers while also making major improvements to the system. These improvements included expanded service areas, increased frequency of service to popular destinations, increased Saturday service, and a new on-demand night service.

History of the Phases

How We Arrived at the Phase 3 Pilot Program

Leading up to this phase of service, NTS took a comprehensive review of the entire transit system, evaluating the performance of bus routes pre and post pandemic, and focusing on the needs of passengers. The lowest performing routes were redesigned to provide improved service with reduced travel times and greater efficiency. The result is a pilot program for future bus service. Rider benefits include expanded service areas, increased frequency of service to popular destinations and increased Saturday service.

With the changes launched with the Phase 3 plan, NTS now services as many stops, people, and places of employment compared to pre-pandemic service but with two less routes and thirty less hourly runs. Major changes implemented during Phase 3 included the return of routes 2A and 6A. The return of these routes brought “every-half-hour” service back to the Amherst Street and the South Nashua areas of the city and brought service to Walmart six days a week for the first time.

As pilot service began, information on the service changes were provided in English and Spanish through multiple media channels to help passengers take advantage of the new system design. These efforts included flyers and ride guides outlining the changes, website and social media alerts, virtual and in-person meetings, correspondence with passengers over phone and email, and answering questions on-board the bus.

Since the pilot began, NTS has continuously sought feedback on the service changes from riders, community members and local stakeholders. Public comments were solicited within a two-month window from August 24 to October 31, 2020 through public outreach formats and events, online and in-person, and made available in English and Spanish, including:

The feedback received has been positive. Passengers have informed NTS that they spend less time waiting for the bus and are experiencing shorter travel times to reach their destinations. Riders have expressed excitement about regular service to Walmart on the newly redesigned Route 2A. Others have shared enthusiasm for being able to get directly into the Shaw’s Plaza on Main Street when using the night service on the newly designed Central Route.

The Phase 3 Feedback Survey produced 106 total responses from the Online, Text, and Paper options available in both English and Spanish. The survey sought to identify what routes passengers most frequently use, how much time they spend on the newly designed service, if their transportation needs were being met overall and where there was room for improvement. Below are the survey results.

Are you a regular NTS rider?

Note: Only non-blank responses shown; 14 survey respondents left this question blank but provided responses to one or more of the other questions.

Which bus stop(s) do you usually use to start your trips?

Note: Many respondents listed routes rather than stops. There were also several responses of “Market Basket” but no indication of which location.

Where do you ride the bus to?

Note: Again, many respondents listed routes rather than locations, but far fewer than with Question 2. Again, there were several responses of "Market Basket" without indicating which location. “Work” and “Home” were in the Top 10. There were also 10 responses related to medical care, e.g., “Doctors Appointment” or “Dartmouth Hitchcock”.

Which route(s) do you frequently use?

Note: Route 4 (3 responses) and Route 8 (1 response) are no longer running during the Phase 3 Pilot Program; only one of the responses (a Route 4) did not list any other routes and one of them said “now 12”. 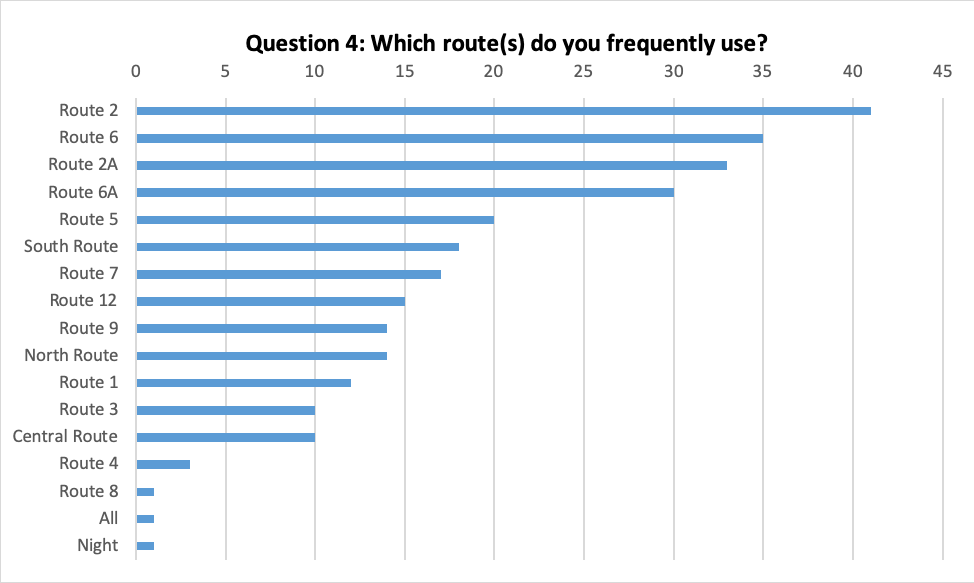 How much time do you spend on the bus now that service has changed? 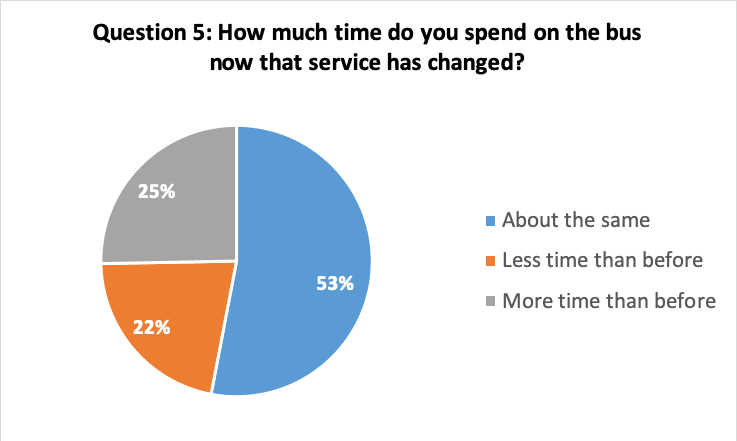 Do you feel that your transportation needs are met with our new Pilot Service routes? If not, how can we better meet your needs?

Thirty-six respondents answered “Yes” that their transportation needs were being met, while six responses indicated “No”. Three of the “No” responses noted “Time” as the reason (see table).

Consistent with the traditional rider surveys, many respondents want Sunday service, faster and more frequent routes, and expansion outside of Nashua. Overall, the comments about the Pilot were positive and comments that expressed a "want" were not about the Pilot service.

Responses that had more than one occurrence and also the "No" responses:

In addition to the Online, Text, and Paper surveys, NTS also corresponded with riders at meetings and via phone and email. There were limited concerns about the pilot service. Other feedback received was unrelated to the pilot program. This included requests for higher frequency service, Sunday bus service, and service to other towns.

Since the start of the Phase 3 Pilot Program, the combination of ridership data, survey results and written and anecdotal responses from the community have been collected and analyzed to determine the continued viability of the proposed system-wide changes.

There were some riders that expressed concern, but the feedback from the community was largely positive, overall. Therefore, NTS will be moving forward with adopting the Phase 3 Pilot service as the new bus service model. Affected bus stops have been marked with a formal notice and the stops will begin being removed after January 31, 2021.

It has been a challenging year, but the staff at Nashua Transit System have all showed great dedication in getting riders to their destinations as safely as possible. NTS would like to thank all those who participated in the Phase 3 Pilot process for their valuable feedback. We look forward to continuing to serve the community and enhance service in the future.

For more information on Phase 3, including a full guide to new and altered service, please visit our Phase 3 Pilot Service page.